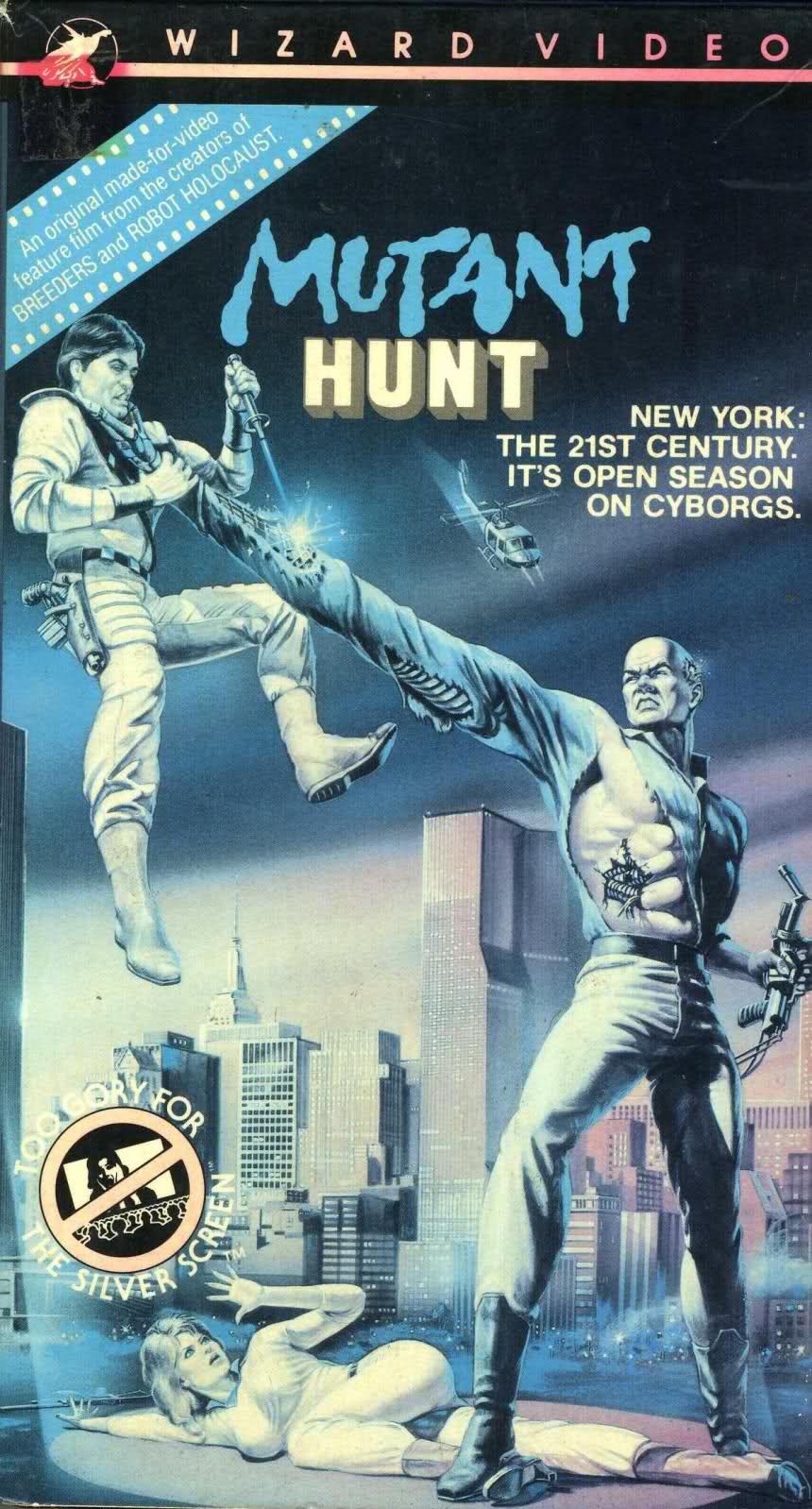 From Tim Kincaid, the Italian-born director of The Occultist, Breeders, Robot Holocaust, and similar nonsense, comes possibly the worst KCM (Kickboxing Cyborg Movie) I have ever seen. As we know, standards within this particular subgenre are not high but Mutant Hunt is even worse than the previous record holder, Cybertracker (although it only just scrapes into the KCM field as it has cyborgs and kickboxing but no actual kickboxing cyborgs).

The head of the Inteltrax Corporation is a shoulder-padded megalomaniac called Z (played by Bill Peterson according to the on-screen credits but by Michael Speero according to the sleeve). He has been working on a type of ‘cyborg’ (as so often, the film-makers have seen The Terminator but failed to understand what the word ‘cyborg’ means) called a Delta-7, which is basically a stunt man in a black jumpsuit and dark glasses. Three of these destroy three others and break out of the Inteltrax building.

The corporation’s head scientist, Paul Haynes (Marc Umile), and his sister Darla (Australian actress Mary Fahey) discover that the drug Euphoron has been introduced into the systems of these Delta-7s, by checking a doodad removed from the back of the neck of one of the destroyed cyborgs. Then two other Delta-7s come to arrest them but Darla escapes and runs off to find freelance bounty hunter Matt Riker (played by Sgt Kabukiman himself, Rick Gianisi).

She finds him in bed with a blonde girl, then two Delta-7s break in but are quickly despatched by Riker, who has crossbows, shotguns and underwater spear-guns hanging on his wall. Then one of the drugged-up Delta-7s turns up, and again presents no real problem, but does sling the blonde out of the window before being destroyed with a small ray-gun. 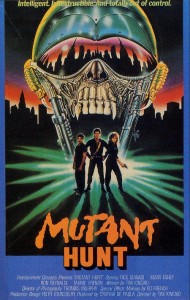 This is, like most other scenes in Mutant Hunt, extraordinarily painful to watch. Fahey and Gianisi are so wooden that one would assume they were playing robots, though in fact they’re the only human characters; the blonde turns out to be a ‘pleasure droid’. Leeanne Baker (Breeders, Galactic Gigolo) who plays her is rubbish but still manages to be the best actor in the scene. Mutant Hunt isn’t an action movie - it’s an inaction movie. Not only are all the fights spectacularly lame, but those not involved in the actual fights simply stand around looking bored while people they care about pretend to kick seven shades of shit out of deadly robots. As for dialogue, it really does look like some of the actors are reading off idiot cards.

Riker ropes in two colleagues: diminutive, moustachioed Johnny Felix (Ron Reynaldi, who also arranged the fights) and Elaine Elliot (Taunie Vrenon - as it says clearly in both opening and closing credits, though on the sleeve it’s ‘Vernon’) who combines her PI and bounty hunter roles with a sideline as a not-very-exotic dancer. Reynaldi stands out among the cast not for his limited acting ability but as the only person who actually knows kickboxing, or indeed any sort of fighting technique. Vrenon makes a reasonable stab at it, as does a Chinese guy seen briefly later on, but nobody else in this movie has a clue about stage fighting, certainly not the director.

And then there’s Domina, played by the wonderfully named Stormy Spill who, like many of the cast and crew, either never worked on another film or (more likely) used a pseudonym here to avoid embarrassment. She is some sort of rival to Z and has her own cyborg, the only surviving Delta-6, called Hydro (Doug DeVos: Breeders) who wears a different coloured jumpsuit to the Delta-7s.

The Delta-7s have (we are told in a clunky infodump) about five times normal human strength and limited telepathic abilities - in other words if you hunt them, they will know about it and come looking for you. Which is convenient. They can also extend their arms, Inspector Gadget style, though we only see this happen twice and it seems entirely irrelevant. Their biggest failing (apart from no fighting skills whatsoever) is that they lumber along at the same slow pace traditionally associated with Frankenstein’s monster and the mummy, and are therefore theoretically extremely easy to run away from. 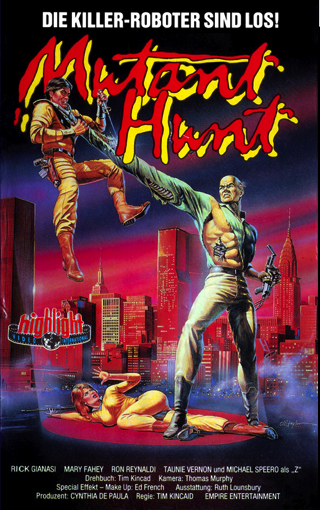 Riker and Felix set out to destroy the remaining two cyborgs, which they do, no problem. For something touted in the ad copy as ‘man’s ultimate enemy’, the Delta-7s are spectacularly easy to beat. The film climaxes at the one good thing this pile of dross has going for it - a spectacular location. The Inteltrax factory is a glass-roofed courtyard between two warehouses, each of which has big, concrete balconies at irregular intervals. Nice location, shame about the film. (All the other locations are bare bones rooms, seemingly inside these warehouses. Shots of doors, window, etc, are crudely edited in, and set decoration is limited to things actually required for the scene. If it’s a bedroom, it has a bed and nothing else; if it’s a lab, it has only a workbench...)

It’s all to do with this drug Euphoron. Apparently it is regularly smuggled in from ‘the Lunar colonies’ but then never reaches the streets. That’s because Z is stockpiling it, mutating it into the form which turns Delta-7s into psychopathic killers, and then selling it to terrorists and dictators. Domina has her own trick up her sleeve - a Delta-8 which she keeps wrapped, mummy-like in her lab. I would like to say it ends with a big, exciting fight, but in fact it ends with a pisspoor fight that’s as dull and uninspiring as all the others.

Christ, there was some crap made in the 1980s, when any old shit could make a profit in the video market. This dross (executive produced by an uncredited Charlie Band for Empire Entertainment) has nothing to recommend it whatsoever: no action, no thrills, no hot chicks, no impressive stunts. The ‘special effects make-up’, such as it is, is credited to Ed French (Rejuvenator, Chopper Chicks in Zombie Town - he also worked on Terminator 2 and Star Trek VI!) with his assistants John Bisson (From Dusk Till Dawn) and James Chai (Muppets from Space!).

Among the general, lazy, shoddy workmanship on display here, two things stand out. One is the ‘fights’, which are so slow and unexciting that they look like rehearsals, not helped by the non-participants’ tendency to stand around waiting for their next line of dialogue. The other gobsmackingly poor work is in the editing. All the dialogue runs like this: cut to person A, half-second pause, person A says line, cut to person B, half-second pause, person B says line, cut back to person A, half second pause... 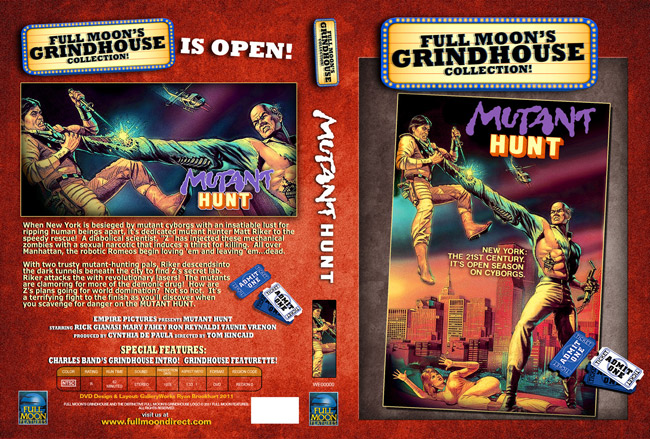 Amazingly, editor Barry Zetlin appears to be one of the few people who worked on this film and is still in the business! His other credits include Galaxy of Terror, Sorority Babes in the Slimeball Bowl-o-rama, Mandroid, Cyborg 3 and Tim Bond's The Shadow Men and he’s still going, whereas very few of other other cast or crew have any credits after about 1987.